Turrning up from a refugee to a resident !

It have been a tough, big and very busy year in my life * just like any other year since I am mature*. In the last post that I wrote nearly a year before, I was refugee dragging grief behind through out her life in Jordan. Hopefully and thankfully, I had granted humanitarian visa to come into Australia, about time too.

Life is different here, or in another words; THERE IS A LIFE here! tedah

Compare to the 25 years in my lovely,battling country, I was only born just after I reached Australia!

I am really busy just like a toddler, sharing the same enthusiasm to learn everything, have absolutely no idea of how some stuffs are going on, but keep trying and embarrass myself, It's just like I was living in another planet. I am seriously looked at like one of centaur: you didn't try trampoline before? you didn't taste Avocado? see traffic jam like something usual! don't know how to use the master card! didn't have a bank account before? didn't ride a car? didn't been in a pool or beach before? didn't do camping before! didn't been in a festival before!?

yes, I am a centaur come from another planet, I came from hell actually!

I am seriously feeling peace inside now, I feel like I made a big jump in my life, I boosted the quality of life for my little daughter and hopefully she will not suffer like every Iraqi child.

In the same time, I am under a big, unbelievable stress in all walks of life; finding a house to rent was a very big challenging, enrolling in TAFE to improve my English keep me busy, mean while I have to start studying soon to do an exam for accreditation of my qualification here. it is big "to do" list BUT I can do it, I can, I can, I can.
Posted by Hadia ( pseudoname) at Tuesday, September 18, 2018 55 comments:

Twelve months have passed since the government announced that the military campaign to recapture Mosul from ISIS terrorists has been finally unleashed. Every one of us was eager to hear that announcement, it’s time to end the dark night, to see the light at the end of the tunnel. This eagerness was disrupted by the strangling worries when you see all those military hosts equipped with devastating weapons and you know that those weapons will be thrown upon the city where innocent people, your beloved family, friends are still living, suffering from fears, hunger, and an unknown destiny. The battle started on17th of October 2016, we couldn’t sleep that night, we were doing nothing but to surf through the news media.
The scenario was fast at the beginning, and the scenes were promising and gave us some hope that innocents are going to be safe. It was fraught to see the people who were lucky to flee safely from the combat zone in that misery, they were emaciated, tired and barely able to breathe and their looks told a story of days full of pain ، worries, and a big question…why us? What guilt did we make to deserve this punishment?!
Day by day, things went more wildly and became bloodier, people were buried under their houses, and we all have lost people we love and care about...
On 10th of July 2017, the Iraqi government announced that Mosul is fully liberated from ISIS terrorists, leaving thousands of killed people and a destroyed city that was inhabited, one day, by two million people.

Within the “liberation year”, Mosul has become a semi-dead city.  While people on the left coast are trying to summon up the courage and to start a new life with the scarce support from the government, the right coast is now is a deserted, destroyed city, people are forbidden to cross to the right coast and many of them are still having relatives buried under the wreckage!
Again, innocent people are the biggest loser from this war and they are always the victims of the politicians and all we need now is the international support and a protection to those innocent people as it is unjust to leave them at the mercy of those who would not care about them and would never bring peace to the city. 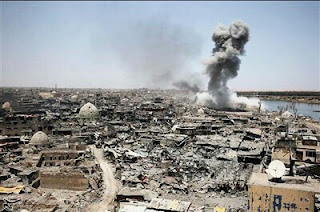 Everyone drinks strength from you

you still strong as you always have been even after the massive devastation,
You are too old but you still at the prime of your life. I have feeling of envy to your ability to keep coolness while you are in the middle of this chaos occurring around you, your silence and quietness magically spreads peace and calm.
You passed through terrible times just like everyone in my city, you saw the scenes of war, death and you have lost all the beloved people around you but you still strong enough to move on through this tough life, you lived those dismal nights full of fear and sadness. You saw the missiles and bullets crushing everything around you and you were brave enough to take the rubbles to keep them deep inside you!!
Do you remember when you have been accused that someday you will get enraged and will blast everything, we had faith that you would be merciful toward your city and you wouldn’t be like them, you do love peace.
You are such a compassionate that you still taking care of that flower growing near you under the wreckage. We know you are sad and crying every night and that feeling of loneliness is tearing you apart but you are not alone, we all have the same feeling, we all are suffering just like you. You mean a lot to us, you are not just a river you are as precious as Mosul.
Keep strong our lovely Tigris, everyone drinks strength from you... 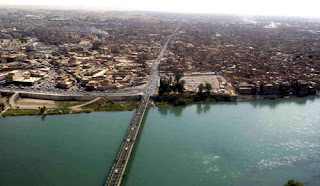 This is a letter from Mosul

Time: 2007
Place: Mosul/Iraq somwhere near Al Nabi younis mosque
Persons appers on the scene: my brother in law (A) and my grandmother 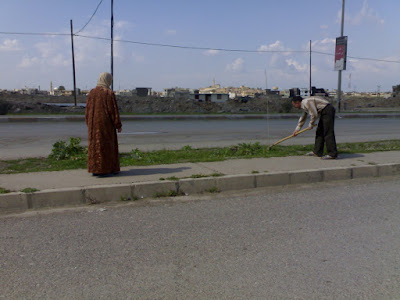 This is my brother ;my brother's hobby was taking care of plants and implanting trees and flowers. (A) loved to give people the beautiful colorful view that bring them happiness and  more over (A) was taking care of the people sight; yes he was an ophthalmologist.

when he was working on returning back the light into the eyes of patients, the terrorisim took out the light of hope from his children; leaving them orphans in a life knows no justice.

(A) succeed in implanting and giving life to a new treee
on the other hand, the terrorisim succeed in taking life of his youngest Son.

ISIS left a bomb car infront of his resident house and hide on the next house during the battle of liberation.


At the end of this struges in life;
The grandmother appered on the picture died,
My brother died,
His younges son died,
His house on the other side of pavement was being shelled and pulled down (2017)
Al Nabi-younis mosque was boombed completely (2014)

and the tree, left alone wispering and praying to Allah (the name of God) to give mercy to the Souls of the father and his Son.

Don't be afraid ; you are between Allah's hand,
You are in our hearts and prayers.

After this picture lose it's components, the world wears the black, and the bright colorful view that my brother tried to give for us, became notheing more than a dream, this picture too is now nothing mere than a scene.

This is one from thousands picture of the my past, a beautiful past but it was un pleasant to live.

Every human has needs, dreams and ambitions and we ,as Moslawis “referring to people from Mosul”, are part of this world, we genuinely have the needs for living and to dream for a better future. I am now 28 years old, which means that I have been living half of my age in warfare, what a peaceful life!!. I think every one in Mosul has the same feeling of living a delusive life, a life in a different definition to those who live out of this spot. If you ask a child what would make him happy, he may answer “meeting his dream hero, or buying a new toy” while a Moslawi child’s answer might be “ sleeping a night without a sound of a bullet”! It was my dream 14 years ago as well. A man may consider himself lucky to still alive after having his house fallen over his head due to an explosion in the vicinity and he has to be thankful even if he has lost all his property just like a man who would get a better job, buy a new car, or win a lottery!. A huge gap is present between the two humans  make it impossible to compare. Mosul now is in urgent need for help, Rehabilitation is required not only in on infrastructures aspects but also on the people themselves, they are now desperate and have lost hope, 14 years of war and fears finished by destroying the city and they are required to show gratitude and without any complains although it’s not their faults that Mosul invaded by brutal terrorists. It is required ages to make that child forget the sight of her lovely doll being buried under the rubble and she wouldn’t hug it before going to bed any more!. Children need to be “reformatted” to love the life again, to dream with brighter tomorrow, to make make them realize that there is another side of this world which is totally safe. 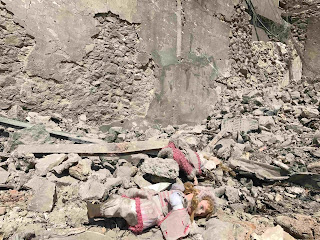 A letter to my mam

Tired I am tonight,  mam. Holding inside me a pain of whole town. Living a story that schehrizade didn't tell in thousand night and ...